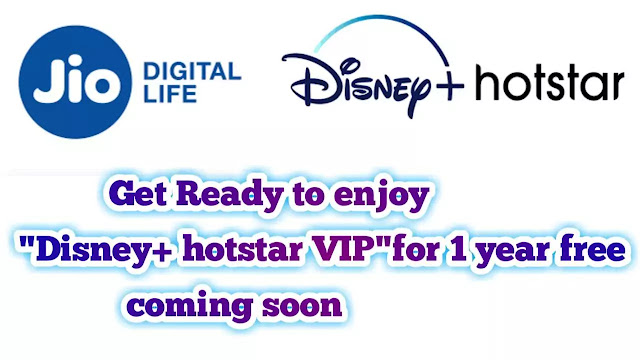 Mr. Ambani has brought Jio at the center of the digital platform not only with many grand investments on its Jio Platform Ltd. for the last few weeks but also with its several Subscription plans to Customers.

As reported by NDTV Gangets360, Telecom Operator Reliance Jio has launched a teaser of bundle offer including a Disney+HotStar VIP Subscription for One Year with the plan of Rs.399.

alongside exclusives to HotStar like Cricket Shows, Premium League, Formula 1. However, there’s no certain news revealed about the limitations of it to other specific plans, and neither any lunch information is provided.

As for now, the teaser banner only mentions “Coming Soon”.

Jio has provided HotStar Premium Subscription in the past (in 2016) and for now only its Jio fiber users recently received the  Disney+Hotstar VIP Subscription through the Jio Tv services. Reliance Aims for 2Crore Jio Fiber users.

The Disney+Hotstar VIP Subscription also offers the latest episodes of Indian Tv shows as 6 am on daily practice.

Since Airtel already brought the Rs.401 prepaid recharge plan with the Disney+Hotstar VIP Subscription for a Year, it could be said to be another move by Reliance Jio to counter Airtel.
The recent gives Jio a formidable profile, valuing its platform at more than $65 billion compared with Airtel $ 40 billion amount which is making customers advancing towards more facilities.

Ans. No, confirmed News come out but it may free with the recharge of Rs.399.

Q2. How can one get a free account on Disney+Hotstar in India?